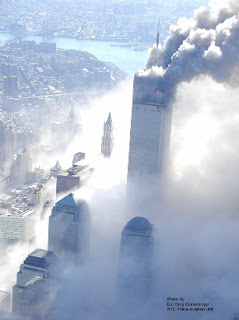 If you were to ask me if I remember what happened on Monday, September 10, 2001, I would have to be honest and say "Nothing, really." I surely must have walked my six-year-old Labrador retriever, done some ghostwriting work for a (now former) client and chatted online with friends and my (now ex-) girlfriend. It was quite an ordinary day, and September 11, 2001 promised to be just one more ordinary day, not just for me, but for nearly 300 million Americans and the rest of the world.

As it turned out, however, a man named Osama Bin Laden and his followers in a terrorist organization named Al Qaeda (The Base) had other ideas, and September 11, 2001 turned out to be our generation's Day of Infamy.

On that Tuesday morning 10 years ago, I woke up a bit after 8:30 AM; I made my way downstairs and went through the usual routine of serving myself a bowl of cold cereal and making two cups of coffee in a Mr. Coffee brewer. As the coffee brewed (making those weird gurgling sounds that some coffeemakers do during the brewing process), I went to the front door, picked up that morning's copy of the Miami Herald, then automatically walked over to the TV set and turned it on.

It must have been 8:48 AM by then; Good Morning America was on the air and already Diane Sawyer and Charlie Gibson were talking (offscreen) with ABC News reporters on the ground in New York City about a possible accidental collision of a plane - possibly a commuter plane or small personal aircraft - with the North Tower of the World Trade Center.

Now, I can't recall exactly everything that was said on that broadcast, but I do remember that there was a lot of confusion and speculation about that first crash, which we now know was American Airlines Flight 11, which had been hijacked by five Al Qaeda operatives after taking off from Boston's Logan International Airport.

"An accident along the lines of the B-25 Mitchell bomber which hit the Empire State Building in late 1945."

"A small commuter plane must have had a malfunction or the pilot died of a heart attack."

"Someone said they thought they had seen a missile being fired at the building."

"It was a big jetliner."

Because Mom was then living in the master bedroom upstairs and rarely turned on her TV, I ran up the stairs, yelling, "Mom! Turn on the TV! There was a plane crash in Manhattan!"

Mom was brushing her teeth at that moment, so she asked me to turn it on while she finished her oral hygiene routine.

By then, ABC's cameras had zoomed out a bit and I could see the North Tower standing against that clear blue September sky; a gash could be seen between the 93rd and 99th floors and angry red flames licked the base of a black plume of smoke.

Suddenly, at the 9:03 AM mark - just as Mom sat down on her bed to watch - we saw a twin-engine airliner (United 77) fly straight into the South Tower and hit Floors 78 through 84.

And on the heels of that, "That's like the climax of Tom Clancy's Debt of Honor." (In that 1994 Jack Ryan novel, a vengeance-driven Japanese airline pilot crashes a Japan Airlines 747 on the U.S. Capitol and kills the President and most of the high ranking members of the government in one fell swoop during a joint session of Congress.)

Of course, there was much worse to come: the collapse of the Twin Towers and the deaths of nearly 3000 people in less than one hour, the news that American Airlines Flight 175 had struck the Pentagon and that another plane (United Flight 93) was on a track for another target in Washington, DC but had crashed in Pennsylvania flooded the airwaves, and every network kept looping the impact of the jetliner against the North Tower almost endlessly.

I had always wondered how the average American had felt on Sunday, December 7, 1941 when the news of the Japanese attack on Pearl Harbor reached the nation via radio broadcasts.

Sadly, now I knew. My country had been attacked. America was - and still is - at war. 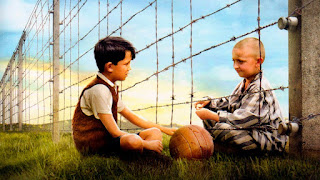 (C) 2008 Miramax, Heyday Films, BBC Films Writer-director Mark Herman’s 2008 film “The Boy in the Striped Pajamas” is a faithful but (necessarily) condensed adaptation of John Boyne’s 2007 novel about a German boy, Bruno (Asa Butterfield), who befriends Shmuel (Jack Scanlon), an eight-year-old inmate in a Nazi concentration camp during World War II.  Like Boyne’s novel, the film is not a definitive history of the Holocaust. It’s not as graphic or historically accurate as Steven Spielberg’s 1993 classic “Schindler’s List,” nor was it intended to be. (Indeed, Herman says in the behind-the-scenes featurette “Friendship Beyond the Fence” that he doesn’t consider “The Boy in the Striped Pajamas” to be a “Holocaust film.”) Set in the early 1940s at the height of Nazi Germany’s power, the film follows Bruno on a journey that takes him and his family from Berlin to German-occupied Poland. His father Ralf (David Thewlis) is a newly-promoted SS officer with a new posting: commandant of 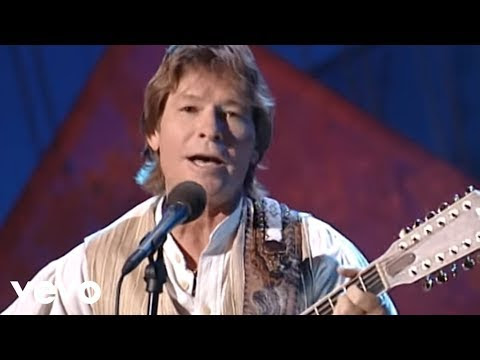 On June 18, 1995, two years before his untimely death in a plane crash off the California coast, John Denver made a rare concert appearance on what was then cable's Arts & Entertainment channel (now A&E). Supported by both a string quartet and a group of backup vocalists and musicians, Denver performed over 25 of his best-loved songs and ballads, as well as a cover of Steve Gillette and Tom Campbell's Darcy Farrow, which Denver often performed at his live concerts and recorded at least three times during his recording career. This concert and the companion two-CD album released by Sony Legacy on June 13, 1995 were titled John Denver: The Wildlife Concert because they were intended to raise awareness of one of Denver's many causes: wildlife and natural habitat preservation. Profits from sales of the album went to the Wildlife Conservation Society, a New York City-based organization that seeks to preserve over two million square miles of wild places around the glo 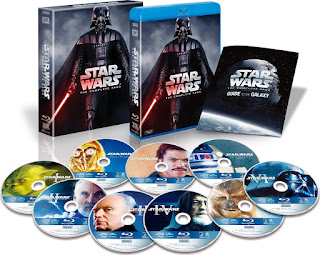 20th Century Fox Home Entertainment On October 13, 2015, 20th Century Fox Home Entertainment re-issued “Star Wars: The Complete Saga,” a nine-disc box set that collects the six films of George Lucas’s epic space-fantasy series set “a long time ago in a galaxy far, far away” on Blu-ray discs (BDs). This set, which also includes three BDs of bonus materials culled from Lucasfilm’s archive, has the same content as Fox’s 2011 “Complete Saga” collection. The only major differences are the packaging and, in some sets, the artwork on the BD labels. Considering that Fox has re-issued “Star Wars”-themed box sets countless times since the days when videotape was the dominant home video format, it’s obvious that the studio hopes to capitalize on renewed interest in the nearly 40-year-old franchise as a result of Disney/Lucasfilm’s “Star Wars: The Force Awakens.” “Star Wars: The Complete Saga” was dropped a month before Fox introduced the Limited Edition Steelbook BDs for each of the