Why does Fox News constantly lie or state false information?
Founded in 1996 by Australian media mogul Rupert Murdoch and led for much of its existence by the late Roger Ailes, Fox News Channel is not primarily a genuine journalistic organization. It has the name “Fox News Channel,” yes, but that’s partly to differentiate itself from its elder sibling, the Fox broadcast television network, which was also a brainchild of Mr. Murdoch and became America’s Fourth Network (after ABC, CBS, and NBC) in 1987.
Mostly, though, “Fox News Channel” is essentially a propaganda outlet for the post-Reagan/Goldwater Republican Party. Its mission, per the concepts laid down by Messrs. Ailes and Murdoch, is to provide viewers with conservative opinion and some news content with a conservative slant (or, if you will, a bias). That’s why much of the cable channel’s programming in prime time (8–11 PM) features Sean Hannity, Laura Ingraham, and other well-known right-wing pundits and almost no news broadcasts except for the occasional “breaking news” or “top of the hour” updates.
Although Murdoch is the guy with the deep pockets that financed FNC and continues to own the cable channel, it was Ailes who first conceived “Faux News” as a right-wing alternative to “liberal media” outlets such as The Washington Post or the New York Times as far back as 1972. Ailes (who resigned in 2016 after several Fox News Channel staffers - including Megyn Kelly - accused him of sexually harassing women under his employ and died several months later after a fatal accident at home) suggested to then-President Richard M. Nixon that the GOP would benefit greatly if conservatives had mass media of their own to counter the aforementioned ABC, CBS, NBC, and various newspapers, media outlets that Nixon considered to be among his greatest “enemies.”
Interestingly, Fox News Channel’s licensing documents with the Federal Communications Commission (FCC) describes the network as an “entertainment” outlet, not a newsgathering organization. Fox News does have legitimate reporters who previously worked for the more traditional “liberal” networks, including Brit Hume, Chris Wallace, and others. They do try to provide viewers with real news coverage (Shepard Smith, for one, has often tried to debunk the Uranium One “deal” conspiracy theory, that many Trump supporters obsess about, but to no avail.) Even then, Fox News executives often insist that even legitimate news coverage is given a “rightward” spin.
That’s why Fox News constantly lies or states false information. That is the organization’s Prime Directive.
(Oh, yes. Fox News Channel, along with Murdoch’s original Fox television network, will not be part of the recently-approved merger between The Walt Disney Company and 21st Century Fox, FNC’s present parent company. Those two properties will be spun-off into what Murdoch calls “New Fox.”)
"New Fox" conservative viewpoints Fox News Channel propaganda Roger Ailes Rupert Murdoch Watergate 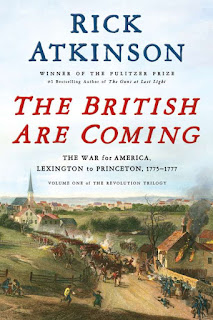 On Tuesday, May 14, Henry Holt and Company of New York published Rick Atkinson's The British Are Coming: The War for America, Lexington to Princeton, 1775-1777, the first volume in the author's The Revolution Trilogy. Using the same vivid, elegaic style he used so well in his previous works on American military history, the Pulitzer Prize-winning author of The Liberation Trilogy now turns his attention and storytelling skills to cover the Revolutionary War.

In The British Are Coming, Atkinson tells the story of the first 21 months of the Revolution from the perspectives of the rebellious colonists and their British opponents. Starting with a nuanced look at the genesis of the traumatic break between Great Britain - a new globe-straddling empire upon which it was said that the sun never set - and 13 of its North American colonies, this new book treads on the familiar narrative of how London's well-intentioned attempts to pay the bills for its increased military expenditure… 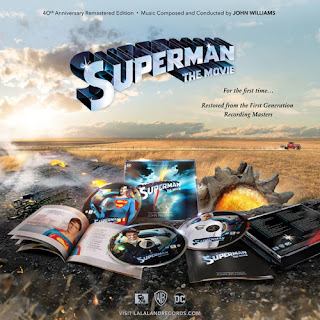 A few weeks ago (on February 15, to be exact), Burbank-based La-La Records released Superman: The Movie - 40th Anniversary Remastered Edition: Music Composed and Conducted by John Williams, a three-CD box set that presents two versions of Maestro John Williams' 1978 score for Richard Donner's now-classic superhero film about the Man of Steel and his first confrontation with archvillain Lex Luthor.

Nominated for an Academy Award and a Grammy during the awards season for 1978, Williams' music for Superman soon became as iconic as the composer's previous scores for Jaws, Star Wars, and Close Encounters of the Third Kind. So connected were the March from Superman and other themes from the original film that they carried over not just to the three film sequels starring the late Christopher Reeve, but also made their presence known in 2006's Superman Returns and a late 1980s animated series, not to mention non-Superman related events such as the Super Bowl half-time show… 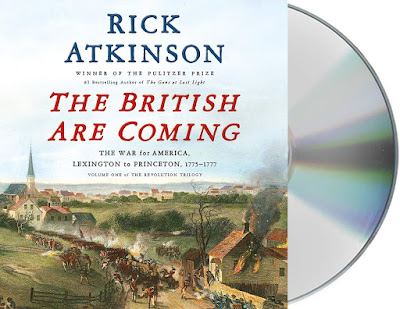 Audiobook Review: 'The British Are Coming: The War for America, Lexington to Princeton, 1775-1777'


On July 4, 2019, the United States of America will celebrate its 243rd year, making the nation the oldest surviving federation in the world. As usual, millions of Americans will celebrate Independence Day in different ways; many will go to the beach, others will have backyard barbecues, while still others will watch The Capitol Fourth concert live on their local PBS station. And because it's a long-established tradition, Americans from coast to coast will ooh and aah over fireworks displays either in person or by watching coverage of the festivities on television.